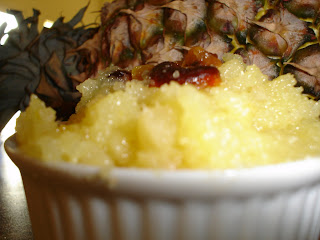 Kesari is a derivative of Kesaravara, which means saffron in Sanskrit. Traditional kesari (the desert) gets its name from its color. The desert itself is a just pudding of sorts with rava or cream of wheat being the star ingredient. I'm always amazed by how different cultures use similar ingredients for similar tasting dishes. For example, there is an Arabic version of kesari called Basboosa, in which cream of wheat is mixed with sour cream and drenched in sugar syrup and then baked. The result, a textural delight-- crusty golden caramelized layer covering a viscously creamy pudding...mmmm...but that recipe's for another day. For now, here's a fruity spin off the traditional kesari.

Make a syrup of the sugar and water. When the water just begins to bubble add the pineapple and bring to boil. In a seperate pan roast the rava with ghee (or butter) till light golden brown. Add rava to boiling syrup. Keep on medium to high heat till the rava absorbs the water and is mushy when pressed between fingers. Allow the mixture to thicken for about 5 minutes. I like it super mushy so avoid cooking for too long. Add cashewnuts and raisins, even some extra ghee if you feel indulgent. Serve warm.
Posted by Veena at 1:55 PM