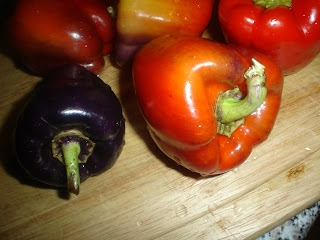 Its been one of those weeks. An RNA extraction that should have taken a normal biologist 45 mins takes moi, the bioinformatician, 5 hours by which point the RNA is probably degraded beyond rescue. Ever hopeful (hoping against hope even maybe) by some random twist of fate there will be salvageable RNA.

Then there was the lab journal club presentation. While working on the powerpoint which in my mind was etched to be for tomorrow, I get an email from a friend wondering why the pizza for the presentation was there but not the presenter, yes, I'd missed my presentation by an hour. Why would we need a journal club for just the lab anyway?? I must admit usually those sessions are fun and free food is always a great incentive...presenting in one of these meetings though is a whole 'nother issue. I mean talking isnt hard, usually stopping my babble is the tough part. But representing somebody else's thoughts, trying to figure out what their thinking, trying to decipher their ever so shakespearean writing and what the heck they were thinking when they came up with 50 billion graphs when just one would be enough to show they didnt have the faintest clue. One of my professors loves to share the story of James Watson's response to the question how they managed to describe the groundbreaking interpretation of the structure of DNA in a one page article, he said "It helps to have something [useful] to say". Its rare to find writing like that anymore-- writing without the fluff. You know, writing just like someone was thinking out loud.


But my week will start looking up. Tomorrow will be nice, I just know it. Theres a little cobblestone pathway in school thats pat in between a dorm, the outpatient center and the gym. Every Thursday since the beginning of summer, that leaf strewn pathway gets transformed into a farmers market. Little green tents propped atop white poles shelter stalls of fresh baked bread, pastry, local dairy cheese, ice-cream, preserves, nuts, fresh roasted coffee, and of course, vegetables and fruit to match the season. Every week as I make my trek (just a short walk really) and am struck by the beautiful colors, I have to kick myself for not getting my camera always thinking that the following week it'll be the first thing I pack in the morning. Sadly that never happens.


Going to that little farmers market is the highlight of my week. Theres the chutney guy who never remembers who I am but needs to make me try his samples always asking if they remind me of home (not really, I've never had cranberries in India). The coffee guy always has some neat information on roasting techniques or stories of his triplets (2 identical boys and one fraternal girl). Theres the produce guy, who insists on shucking corn with his grimey, chubby fingers, breaking them in half and challenging people to try it raw. He's so proud of his truckload of corn that you would have to be stonecold-hearted not to and he's rightfully so-- its the sweetest, most tender corn ever. Then theres my weakness, the French bakery stall, for whatever reason my usual order of 3 almond croissants, 1 baguette and the pear tart cost about a third less when theres the friendly moustached guy instead of the lady. I do feel guilty walking in with bags of groceries when I really should be working on experiments but it seems like everybody in school makes the most of that 4 hours of hustle and bustle--people actually work their meetings around the farmers market! Tomorrow will be the last week they're out this year and they will surely be missed. That poor little pathway will go back to its foliage and occasional hypodermic needle strewn self. Another sign of the changing of seasons in Baltimore, I guess. Definitely something that I'll be looking forward to next year.

Heres a recipe I made with the cutest, most beautiful fall colored peppers from the farmers market. I took before and after pictures because I was worried that the purple one would lose its color when baked, rightly so because it did turn green whereas the reddish yellow ones were fine. Wonder what the deal is with purple peppers. 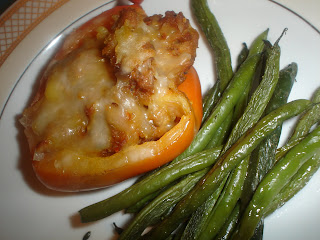 
Preheat oven to 350F. Half the peppers, remove seeds and lay them cut side up in an oven proof dish. Wrap potatoes in a wet paper towel and cook in the microwave on high for 3 minutes or till you begin to smell them. Keep aside to cool for a bit. In a medium sauce pan, heat about 2 tbsp of vegetable oil, add cumin seeds. When they splutter add the onions, chilli powder and salt. Add the sausage and cook till brown. Add the potatoes and mash while mixing so as to incorporate everything into a mad mush. Check salt. Spoon the stuffing into peppers, sprinkle cheese over peppers and place dish in the oven for about 15 minutes or till cheese just melts. I like a bit of a bite in my peppers but if you don't you can cook for few minutes longer till the cheese gets brown flecks on it and peppers are soft when poked with a fork.
Posted by Veena at 6:19 PM