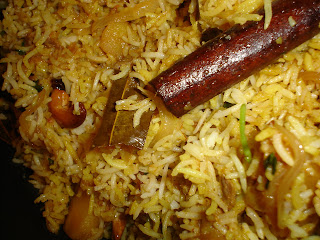 Everybody around me seems to be big on lamb and quite frankly I don't get it. For the longest time I couldn't even tell the difference between that and beef. Even now if you were to put a plate of each in front of me, the only way I could tell them apart is that lamb is just a bit "gamier", read stinkier, than beef. But since eating alone is among the few things I dislike more than a root canal, I had to cater to the lamb crazies around me with this Biryani. Now Biryani quite simply put (and because I'm not a purist) is just curry mixed with some fragrant rice. Hyderabad, the place my mother's from, is known for its special take on Biryani. I never understood the hype about this either till my cousin took me out to try some 3 years ago. Wow! I really don't know what they do differently, but the meat (chicken in my case) is super tender, spicy but not overly and it has just the right amount of heat that adds flavor without searing your tastebuds and clearing your sinuses (searing and clearing, ha, biryani poetry!). My recipe although pretty good, just does not come close to the Hyderabadi yardstick. I don't even bother trying to mimick it, I'll just let the experts do what they do best and hope that someday (if and) when I go back my cousin will take me there.
Now if I'm making this recipe on weeknights I just use an entire pack of the store bought biryani masala (I like Shaan). That really wasn't my plan this time around, but I caved into pressure at the last minute and threw in a tablespoon of the store bought stuff. I don't think it was necessary or made a big difference but I was less nervous that it was there. This biryani is spicy and a definite tear jerker just like my favorite movie of all time, The NoteBook. At the risk of overusing youtube's embed option (this phase too shall pass!), here's a compilation of all the great scenes to Chantal Kreviazuk's perfect song, Feels like home.

Recipe
1.2 lbs of lamb cubed (substitute chicken if you prefer)
2 bay leaves
2- 2 inch sticks of cinnamon
4 star anise
1 tbsp chilli powder
1/4 tbsp corriander powder
1/4 tbsp cumin powder
1 tbsp biryani masala (optional)
2 large onions, chopped
1 large tomato, chopped
2 potatoes cubed large
2 tbsp ginger-garlic paste
1 tsp turmeric
1 lime cut into thin slices
Crispy fried onions, raisins, toasted cashew nuts and cilantro for garnish
2 tbsp vegetable oil
1 tbsp of salt (or to taste)
For rice:
3 cups of Basmati rice (you want specifically Basmati, a different variety could get mushy)
7 cups of water
1 bay leaf
2 inch cinnamon stick
2 star anise
1 tsp salt
Preheat oven to 200F.
Take a large oven proof dish (something like a stock pot or dutch oven). Add bay leaves, cinnamon, anise. Let cook for a few seconds. Add onions and tomatoes and all the spice powders. Let cook for till the onions and tomatoes become this nice brown mush. Add the meat. On another burner and in another big pot (doesnt have to be oven proof) bring rice, bay leaf, cinnamon and star anise to boil with the water. The rice should only partially be cooked, ie, it should have elongated but if you bite into a grain there should still be powdery bits in the middle. The meat in the other pot should turn opaque (this usually happens at the same time as the rice). Add potatoes and lime slices to the meat and stir for another 5 minutes. Turn off the heat from the meat. Drain rice and layer over the meat. Cover the pot with aluminium foil, make sure its well sealed before putting on the lid and placing the pot in the oven. Its nice to leave it in the oven for about an hour or longer with a minimum of half an hour. Take pot out of the oven, unseal and garnish with cilantro, fried onions, cashews and raisins (the last two fried in ghee is super!). Gently mix from bottom up to get the curry and rice mixed uniformly (well, semi-uniform is also ok).
Posted by Veena at 1:50 PM

Hi Veena,
A very yummy pic to start with. I loved your recipe for Lamb Biryani. Could you join us @hobbiesnyou.com and post this and a few other recipes in exchange for some publicity? Yes, we @ hobbiesnyou.com are starting a free newsletter and we would be glad to have this article in it and more importantly we would love to have you onboard. Recipes from a SCIENTIST are a very rare thing and we would love to have you write a few articles for us, recipes that is. Please log on to hobbiesnyou.com, register and post your articles (As many as you can...). We will make sure to send you a copy of the newsletter and keep you updated where ever we take your article and publicize your blog, in advance ofcourse. So, why wait? You can find more details @ hobbiesnyou.com!