I've gone on a produce binge (again) this week. I have more cauliflower, kale, broccoli, apples, quince, bananas and tomatoes than I know what do with. An aunt visiting from California brought some Fuyu persimmons to add to the list. But here’s the problem. I was minding my own business and walking by the kitchen the other day when I saw IT. Scurrying from the trash can to the oven...a little brown mouse!! That poor little guy didn’t have a clue but his sight was enough to make my skin crawl. I'm not particularly squeamish-- bugs, spiders and other creepy crawlies don't affect me whatsoever (except snakes, lizards, aligators, ok reptiles in general). I dont care how cute Ratatouille was, there are certain things I just have to draw the line at and this was it. The exterminators were called for an emergency check-in that very afternoon. But heres the other problem, they say that theres no sign of infestation and that he must have just been a stray that crawled through the doggie door and went up the pipes between the walls, apparently very common in Baltimore rowhomes!! The only thing they can do is put mouse traps around the pipes. That thought was enough to keep me away from the stove for a few days. So I’d pack hubby and my little guy to grandmas’ for meals and subsisted on frozen (pretty good) vegan burritos for the rest of the week. It wasn’t that bad really and it gave me a chance to catch up on my reading and (loooong overdue) internet scrabble. But the Californian aunty was to come over for dinner today and I had to make some food! Finally, some incentive to drag my lazy behind back to the stove. Nothing fancy, just a simple Indian meal: Fish curry, chettinad stir fried chicken, sauteed kale and for dessert, Lebovitz’s adaptation of persimmon bread (not very Indian, but oh so delicioso!). 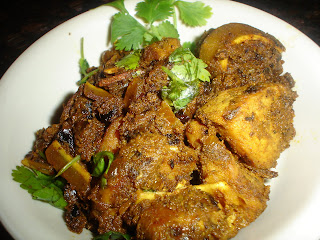 Place a large saute pan on medium heat. Add 2 tbsp of vegetable oil, onions and chicken. Fry for a few seconds and then add salt, turmeric and chilli powder. Stir occasionally to avoid burning. In the meantime grind tomato and coconut to form a watery paste. Add tomato-coconut paste to chicken. Fry till all the liquid evaporates, stir once in a while. Powder peppercorns, cumin, fennel seeds, cardamom, cinnamon and cloves in a dry/spice grinder. Add spice mixture to the chicken when almost dry. Add coconut slices and lemon juice to the chicken, toss to mix well. Garnish with coriander leaves. 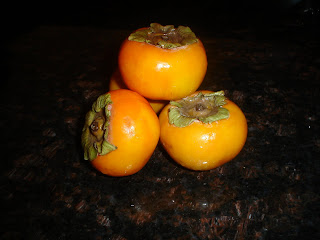 Preheat oven to 350 degrees. Prepare 2X9-inch loaf tins by buttering the insides and lining parchment paper (or dust flour instead of parchment). Mix all the dry ingredients (flour, salt, baking soda, nutmeg and sugar) in a large bowl. Make a depression in the center and mix in the wet ingredients. Then add nuts and raisins. Bake for about 1 hour (but mine took a little longer than that), or until toothpick inserted into center comes out clean.