"This is your room", the watchman said as I rolled my gigantic suitcase to a stop. The room was locked and outside on the ledge of a wall facing the courtyard, two girls sat talking. They spoke and dressed differently from anyone else I'd seen in Madras till then, in fact, they spoke and dressed just like me! All pangs of loneliness and homesickness temporarily fluttered away, quickly replaced by a sense of belonging as I instantly felt the connection with my new roommates-- all part of the brilliant, insightful plan of the hostel management. They figured that by placing all the NRI (non resident Indian) girls together, there would be stronger bonds, fewer arguments and fewer complaints of theft of "foreign" necessities like soap, shampoo or what have you. Thanks to that logic, at one point in time there were 10 of us in a 10X20 ft room, sharing one single bathroom! As it turned out all of us NRI's were from some part of the Middle-east, a majority were from the UAE, one was from Qatar and I was from Kuwait. We were each allotted one sturdy wooden twin bed with the ultimate luxury of a spring mattress but there was simply no room for 10 of those, 2 study tables and an engineering drawing stand. So in a flash of
resourcefulness bordering genius, we reasoned that since the sides of the beds were low we could line 4 beds next to each other against the longest stretch of wall and that (curbing any tendency to sprawl) would allow all 10 of us to sleep and still acommodate all the other necessary furniture. 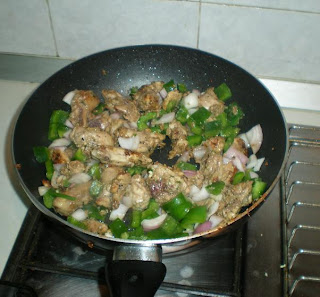 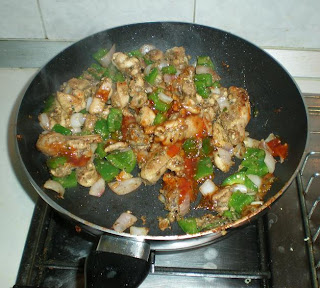 4. Dissolve 1 tbsp corn starch into 1 cup of water or chicken broth (for more gravy increase broth quantity) and pour into the pan. Mix vigorously till the liquid thickens (about 3 minutes). Check seasoning. If you want it saltier, add more soy sauce. 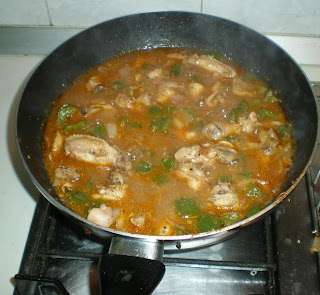 5. Take pan off the heat and garnish with chopped spring onions and cilantro (optional).

This is Chechi's final dish which, she says she would have liked a bit more dry: 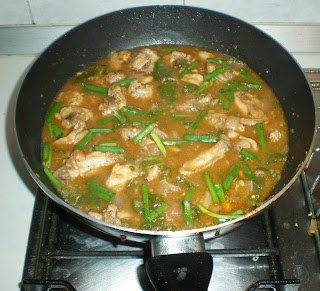 This is my almost finished dish, its very dry but again you can completely control that with the broth: 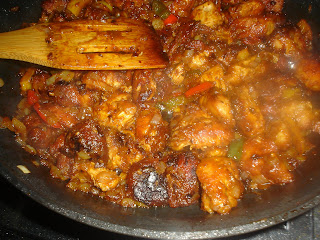