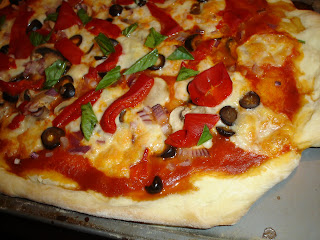 Pizza is the best medium to eat just about anything. In fact, theres this little place in Towson called Pasta Mista that even puts different kinds of pasta on their pizza. They have pretty uncommon combinations including a chicken parmesan pizza, chicken ranch pizza and, a favorite that I havent had since leaving Boston, buffalo chicken pizza. Its great! If I could eat there every single day, believe me I would but curbing those cravings is crucial especially because I enjoy having a real waistline.
Somehow though, eating homemade pizza feels less guilty. I know exactly what goes on my pizza and can, on the extremely rare occasion, even cut back on the cheese-- hardly ever happens but options are always nice. I've been, until recently, bit of a pizza snob. I'd never been adventurous enough to try anything other than the usual veggies, chicken, and rarely, shrimp or beef. But this year has been a real eye opener. I'd never understood how people could eat tiny, salty, (in my mind) stinky filets of fish on their pizza till I tried it. There was no smell whatsoever and the saltiness was a beautiful compliment to the sweet caramelized onions, fluffy crust and black olives. And then theres the rosemary potato pizza with gruyere cheese, that vanished before I could take pictures of it. Here's a recipe for an easy-breezy pizza crust and a couple of my new found combination favorites.

For the pizza crust
3/4 cup warm water (105°F to 115°F)
1 envelope active dry yeast
1 tsp sugar
2 cups (or more) all purpose flour
3/4 teaspoon salt
3 tablespoons olive oil
Preparation
Pour 3/4 cup warm water into small bowl. Add yeast, sugar and stir. Let stand until a froth of yeast forms (about 5 mins).
Into the bowl of a stand mixer add flour and salt. Add yeast mixture and 3tbsp of oil. Mix on medium high (with dough hook) for about 7 minutes till a smooth dough forms. If still sticky, add a little flour to the bowl and knead dough by hand (in the bowl itself). Add a little more oil, flip the ball of dough over and add a little more oil. Cover and let rise in a warm place for about an hour or till it doubles. Punch down dough and shape it onto the tray/ stone you plan to bake pizza on. Add toppings of choice and bake in a 350 degree preheated oven. If you want the crust on the crispier side, prebake the crust for about 7 minutes, add the toppings and return back to the oven to finish cooking. Pizza is done when the crust there are tiny golden brown specks and cheese is melted and bubbly. 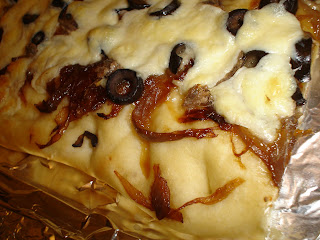 Combination 1. Caramelized red onions, anchovies, black olives and fresh mozzarella
For caramelized onions:
1 tbsp olive oil
2 large red onions sliced thin
Add olive oil to a saucepan on medium heat and then drop in the onions. Once the onions just start to soften, reduce heat to low and cover. Stir occasionally to avoid onions sticking to the bottom of the pan. About 30 mins later you should have beautifully caramelized onions. I layer the onions on the crust first and then add the other toppings in the order listed below.
Remaining toppings for this combination in order:
Half of a 2 oz tin of flat anchovies, crumble as spreading around pizza (I like the Cento brand)
Handful of Nicoise black olives sliced (or any black olive if you're not a purist)
A nice fist sized ball of fresh mozzarrella, pinching off chunks as you drop around pizza
Combination 2. Rosemary covered potatoes with gruyere cheese
For potatoes:
5 small potatoes or 10 fingerling potatoes
Juice of 1/2 a lemon
1 sprig of rosemary chopped
2 spring onions chopped fine
Salt to taste
Wrap potatoes in wet paper towel and heat on high in microwave for about 4 minutes or till you begin to smell the potatoes. Peel and let cool. Once cool, slice potatoes into thin rings (if using fingerling potatoes just half them). Mix lemon juice, spring onions, rosemary and salt in a bowl. Toss the potatoes into the lemon dressing to coat well. Let sit for about 5 minutes.
Layer potato mixture over pizza dough. Do NOT pour dressing remaining in the bottom of the bowl over the pizza. Break little chunks off the gruyere cheese and sprinkle over the top.
Posted by Veena at 7:29 AM