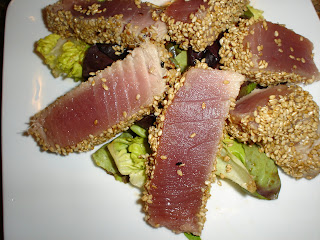 There is this real quaint family owned restaurant near where we live. It almost looks like a run down old outhouse till you catch a glimpse of the sign fighting nested creepers and vines that reads in cartoon letters akin to fallen tree trunks, Amano's. Having been there a few times before hubby highly recommended it, although he warned that sometimes they run out of food, but whatever they do have is usually very good. With that in mind, we parked and walked in, albeit a little apprehensive about the stability of the edifice. Inside, we were greeted by warm orange and yellow decor belying the southwestern landscaping outside and taking on the feel of a little Italian bistro. Lucky for us that day, they hadn't run out of any food. Not that I would mind even if they had, I can never make up my mind and a dearth would only help making my decision easier. Nonetheless, I'd settled on their fish dish, the exact name of which escapes me, but it was basically wasabi and sesame crusted tuna, which almost tasted like sushi. For best results and to make it sushi-ish, tuna should be eaten rare but you can cook it for longer if you really really want (or have) to.

Rinse the tuna steak and slice into 2 halves. In a bowl mix vegetable oil, soy sauce and wasabi to get a homogenized mixture. Dip the tuna halves into soy-wasabi mixture and then coat generously with sesame seeds. Wrap each half in foil and throw on a grill preheated to high for about 5 minutes on each side. Unwrap, slice and serve over salad or with sushi rice and gari.