Lotsa yummies for a new year!

Phew! I'm back! Happy New Year everybody! Sorry about being away for so long-- my camera never recovered from the shaking-toddler syndrome and had to be put to rest (and replaced by a shiny new one). But instead of lame excuses I'm going to make it up to you. I'm going to catch you up with everything thats been going around here since October, yep, 4 whole months of catch up. Ready? Here goes...

So October was my munchkin's bday month and since his birthday was on a weekday just before the start of the real COLD cold, we stretched out the celebration through the entire week. He had 3 cakes only one of which (thank goodness!) came out of our home kitchen. Given his current obsession with Toy Story and the release of the 3rd sequel, I thought I'd be clever (Toy Story 3 and its the little guys 3rd birthday, get it? my creativity is shocking at times ;) ) 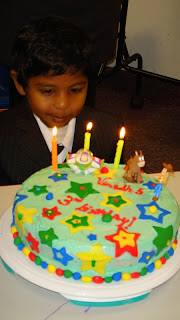 Thanksgiving was in November and this is usually spent between the two homes-- my parents and in-laws. Lucky for me though this year I didnt have to make the turkey for either homes. I did however make this outrageous cheesecake. Deep breath. A kahlua- chocolate ganache cheesecake with a chocolate cookie crust. It was delicious! I don't know what Deb was talking about but I had no trouble whatsoever polishing off a huge honking slice. But maybe skipping the turkey completely helped a little (was only able to get pics of this one on my phone and am too lazy to upload pictures from two devices in one day).

December was of course Christmas month. Aside from the constant sickness in our home, I made my directoral debut with a nativity skit in church, including a special appearance as the camel. My little Joseph had to be taken to the doctor for an emergency visit (ear infection) on the day of so we had to borrow a substitute for the next class. Its a blurry picture for a reason but if you look real close there is a camel head somewhere! 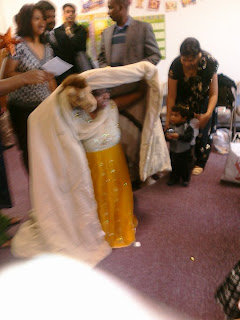 And then there was my cousin who notified us just 4 weeks before his December wedding (why in the world would you get married in winter!!) in CANADA! But the wedding was great and turns out said cousin is actually pretty connected-- we got to rub shoulders with Roger Mooking of Cooking Channel's Everyday Exotic. 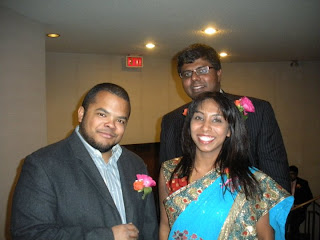 Back to Christmas. The general season was fun with a boat load of parties, an award for (second) best dessert at the office party (my three layer peppermint-chocolate cheesecake lost to green rice krispie treats, go figure!!), and some fun times with family and friends (again pics on phone, sorry!). 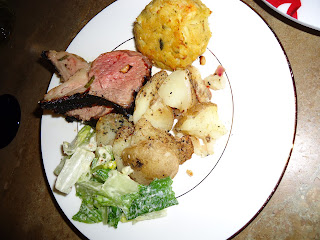 New Years eve was real quiet with hubby grilling us a surf and turf dinner of herbed lamb chops and crabcakes accompanied by a gorgeous bottle of bubbly while the little guy feasted on Toy Story mac and cheese and sprite. For dessert, I had to, had to, HAD to try Georgetown cupcake's peppermint-white chocolate and strawberry champagne cupcakes so I went to their Bethesda location on New Years eve and came back with a dozen and a half. You know, half for the eve and a dozen for New Years day when we had to spend time with family. Those cupcakes btw were divine! 4 cupcakes later, the frosting got to be a bit too much, but I think those of you with normal appetites, ie who can stop at one, will be fine-- the cake to frosting ratio is cupcake perfect (1:1) and completely yummy. 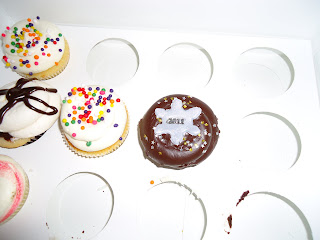 How can you not start a new year with a breakfast of champions. The grown ups had french toast made with fresh brioche while the little man feasted (read: barely nibbled on) blueberry waffles. I'll give you recipes for these real soon too, they were sooo good. 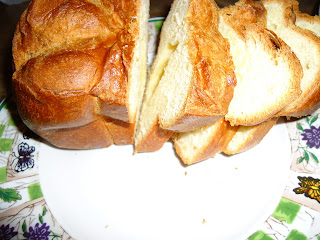 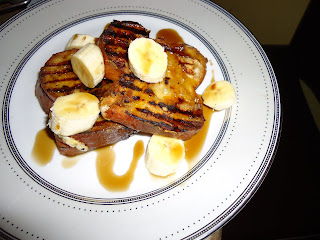 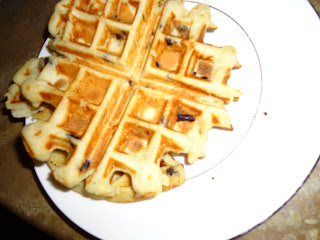 January is almost over and I'm such a slacker but I promise you with many many new recipes that are itching to be seen! Here's wishing you a wonderful and prosperous 2011!
Posted by Veena at 6:47 AM

You're too sweet Sheryll! I'll try to be better :)