I did some of my schooling in New England and there was introduced to lobster. My cousin P took me to this place in Boston’s Chinatown called Hong Kong Eatery or Cafe or something like that. It was one of those communal eating places where when things got busy anybody could sit next to you. Yes, I've been there a lot and experienced this way too much. But the very first time we were there, it wasn't crowded and P and I feasted on our own 4 person table, allowing plenty of room for all the food we ordered. We maneuvered juicy, savory chunks of lobster out of their shells, scraping bits of the amazing ginger-scallion batter with our teeth. And just like that I was hooked to lobster! I’ve taken everybody I’ve known to that little shack and they have always loved it. I've since eaten lobster many different ways and it was my most favorite crustacean for the longest time. Was you ask? was.

You see, we moved to Maryland (MD) and some of the world's best crabs come from here. I've had some really nice crab cakes but never manned up to the entire crab. I'd keep remembering the time in Kuwait when my father ordered crab, which according to his chef-friend was fresh caught from the sea surrounding the restaurant. The crab came to our table complete in its shell-y glory and my Andrew-Zimmeran-wannabe father didnt know what the heck to do with it. We tried to help using our butter knives and forks...but nada. Even the chef-friend cowered saying that although trained to cook, he'd never actually eaten it! Finally my father sent back the crab and settled for a dinner of lamb kebabs and fries. In retrospect though, what a waste of good crab!

Back to Maryland, circa 2009. My boss, turns out, is a big crab buff. Every summer he throws a crab fest and everyone working with him is invited. Novice unsuspecting moi, was a little late getting food, so I took a paper plate, got some pasta salad and sat at the only empty spot which turned out (fortunately!) to be next to people from coastal China. To my plate I gingerly added a male and female crab, not really knowing the difference other than that they were in different boxes. And then out of nowhere, I hear stern commands, “No, NO, NOOO plates!” It was the boss. After a quick apology I dumped the crabs onto the paper lined table and… got savage. My very skillful table-mates gave me the lowdown on dismantling a crab and how to even tell the gender by looking at their flip sides. The soft, sweet meat was delicious without being masked by fillers usually found in crabcakes. The flavor was enough to beat lobster, but the work involved in getting to the good stuff was too much. There was absolutely no way I could make it at home, or so I thought. Till I decided to meet my fears head on and made Crab cioppino. It was gone before I even had a chance to take a picture. Last night however, I made an Indian-ized curry version which was perfect for drowning rice. I've got to tell you, there's no point being dainty getting the meat off the shells, the best (and only way) is to get dirty. If you're too tired to crack the shells and scoop out the meat, I found that violently shaking is pretty effective in getting the meat out (with a bonus of curry splatter on your walls). As for the claws, making an indentation with your teeth and using that as a hold to pry out the shell seems the way to go. It really is a labor of love-- a love for food, which is why inspite of having two fingers pierced by the spines of the Alaskan king crab (a completely different beast from the snow crab I first cooked), I know I will make it again! 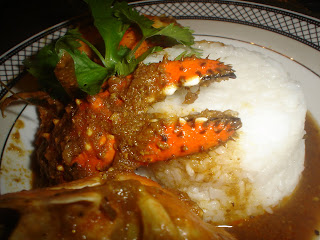 Grind in a blender with half a cup of water till the following resemble a paste:
6 small yellow onions, quartered
4 green chillies (thai peppers)
5 cloves of garlic, coarsely chopped
1 tbsp dessicated coconut

Heat oil in a shallow, wide pan. Add ground onion paste, ginger-garlic paste and chilli powder. Cook the mixture till it becomes thick, brown and leaves an oily smear when mixing around. Add the freshly roasted spice mixture. Add 2 cups of water. Check seasoning at this point and add salt, making sure that the gravy is slightly undersalted as the crab is a bit salty by itself. Next arrange the crab pieces in a single layer around the pan and then add the tamarind "water". Cover the pan and cook on low heat for about 15 minutes. Garnish with cilantro if desired and serve with rice.
Posted by Veena at 6:11 AM