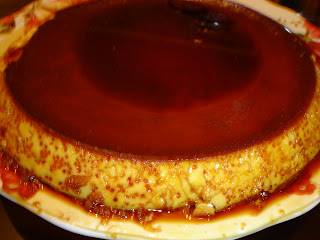 My father had lots of Filipino friends in Kuwait. In fact our neighbors across the street from us had loads of parties and we were always invited. There were some party staples I always searched for-- Pancit (a noodle dish) , the most amazing fruit salad (still looking for ingredients to make this) and what they called Lamington pudding. I looooooved the "Lamington pudding", I could make dinner out of that alone. But of course back then I was too young and didnt think of asking for recipes so I'd just eat them at said parties. But a couple of weeks ago when I asked my Filipino friend for the recipe she didnt quite understand what I was talking about. And then I described it...its this really thick, creamy pudding with a beautiful dark caramel topping --"Oh! You mean Leche Flan!" she said. Apparently I grew up with a complete misnomer, its ok wouldnt be the first. My friend said that it was super easy and she could usually make it in less than an hour with about 10 mins of actual work. Great! With a baby who knows no naps thats about all the time I can spare. So I gave it a shot and she was right super quick, delicious and just the way I remembered it! My mom makes Creme Caramel which is somewhat of a similar concept-- vanilla flavored pudding with caramel syrup but the texture is just not the same. I know there is Mexican Flan which from what I remember of the one time that I tried it was similar to my mother's version but can't say for sure. 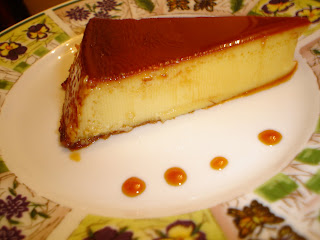 Leche Flan
Ingredients
For pudding:
1 (14 oz) can of condensed milk-- I used Carnation just b/c it was lying around
1 (14 oz) can of evaporated milk
12 egg yolks
1 tsp vanilla extract
For caramel syrup
1 cup of sugar
3/4 cup of water
Method:
Preheat oven to 350F.
Put sugar and water in a saucepan and let boil on medium heat till nutty brown and thick (will still be of pourable consistency). This will make the caramel sauce. In the mean time beat egg yolks till pale. Add condensed and evaporated milk and vanilla extract. Beat, the mixture might seem too runny but its ok. Keep aside till ready to assemble everything for flan.
Assembly:
Once the caramel is ready, pour it into a mould. I used a 10in deep glass pie dish but small ramekins for individual portions will also work. Then pour the egg mixture into the mould. Seal the mould with aluminium foil. Place the mould in a larger oven-proof dish and fill the large dish with water till about 1 cm below the edge of the mould (make sure no water gets into the covered mould!). Put the larger dish with mould into oven and let bake for about 45 mins or till set. You can tell when you touch the top of the pudding lightly and your finger does NOT leave an imprint. Let the pudding stand till it comes to room temperature. To remove from flan from mould, run a knife around the edge of the mould, cover with a serving plate and quickly invert. You should hear a big sluuurp, and then remove the mould. Although you can eat it at room temperature I like mine cool, so we cut it after refrigerating for a couple of hours. Delicious!!
Posted by Veena at 7:39 AM